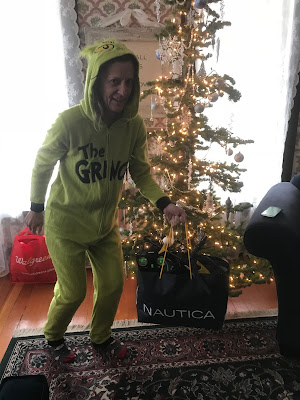 This year's holiday festivities included a Secret Santa who was to be our favorite fictional character. My brother-in-law drew my name and I selected Monica Geller as my fictional character sometime early in December. I figured I might get some coffee or, more likely, a Swiffer but in any case, I wanted to select a character that was difficult for my Secret Santa.

As the month wore on, and I got grumpier and grumpier, I changed my fictional character to The Grinch. My brother-in-law was saved. He had no idea what to get me as Monica Geller.

Before I even opened the box, he told me I could thank him now or thank him later. As soon as I saw the green furry material, I had no doubt that the joke was on me. From the box, I pulled a full-body Grinch onesie.

I put it on immediately and modeled it for the entire family and I thanked my brother-in-law with a great, big hug.

But the joke may be on him because I've worn it every day since then. It's cozy and comfortable, comes with a hood, and scares little children and neighbors alike. (We currently have no window coverings in our living room.)

I've thought about joining the Run, Grub and Chug Club for the sole purpose of having an excuse to wear it. (They often wear costumes.) I will undoubtedly wear it every day next December on the Vancouver waterfront for my morning walks. And, I can promise, dear, sweet brother-in-law, I will wear it to your house next Christmas Eve.