There's a lot going on this month:

Here's what you need to do to cover all your bases.

'Tis The Season for Driveway Sittin'

A neighbor pedaled by and waved. She said, "Welcome back" although we had never left.

During the summer, a lot of the neighbors do leave so it's common to not see someone for months. It's just too hot for us to sit in the driveway in the summer so people assume we've left town altogether.

Last night, we took advantage of cooler weather. We opened the garage door, dragged out our camping chairs and a couple of drinks, and waved at the passerby.

We may not have left but we're back. In the driveway. Most evenings around sunset.

Feel free to stop by and say hi.

As if sensing that Id' be required to do chores, I developed a sudden case of wanderlust. I was driving home from an early morning appointment on Friday and thought, "Why not keep going?" I could be in another state in four hours. 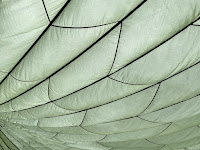 Hubby had been making a list for Home Depot. I didn't even know what was on the list but I figured it could only mean one thing: home work.

As I considered travel as a means of avoiding the list, I remembered Hubby had an appointment that afternoon and I had to be back bright and early on Monday morning.

Beer was more motivational than the list so we headed into the hills. The temperatures were not that much cooler and the beers were served in cans. Later, we found a winery with a parking lot turned patio under a parachute tent. The two-person band that played reminded me a little of some of the characters in The Righteous Gemstones. They were earnest but just off the mark. 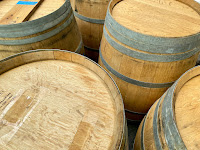 It wasn't much but it was enough to satisfy my wanderlust and, more importantly, whatever was on the Home Depot list.

The next day, we went to Home Depot where we bought a plunger.

You can just imagine what was on the to-do list.

Gone to the dogs.

We went to the mall on Sunday, mostly to walk. It was over 100 degrees outside and we were feeling lethargic and lazy. I suppose that's what Sunday's are for but we thought it would be good to get out of the house and get some exercise.

It turns out that teenagers still hang out at malls. The girls walk in packs and dress alike, wearing clothes that seem a tad too scanty to my old eyes. Innocent enough, though. They're trolling for attention - in real life rather than on social media. Were we that different? I don't know. I don't remember hanging out in malls.

What surprised me was the dogs. There were several. All were leashed but none of them wore a Service Dog vest. There was a lot of barking that echoed in the crowded mezzanine.

I get that it was too hot for owners to just let their dogs out in the yard, too hot to take them for a walk. But part of the reason for dogs to go outside is to relieve themselves and it was disgusting to see that at least one dog had done just that in the mall. We made a couple of laps around the mall's second story and each time passed a pile of excrement at the intersection of busy walkways. In that time, the owner hadn't come back to clean up its pet's mess.

I have never been a dog owner so I maybe I can't relate but when owners fail to clean up after their dogs, it sort of ruins it for other dog owners. I suspect there are circumstances when it's difficult or impossible to do the right thing in a given moment. But the more I see of dog poop, whether it's in a mall or in my community, the more I come to believe that this is not the case. Rather, I start to see all dog owners as irresponsible. (I know that's unfair because most of the people I know are dog owners and I see them all as responsible.)

Nevertheless, no amount of bitching will make the poop pick itself up. It's infuriating and yet I don't have the time or energy to be infuriated. Well, maybe enough time, at least, to write this post.

Anyway, maybe next weekend, I'll go for a bike ride instead.

I finally wore the old one out. 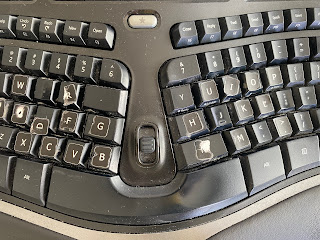 When I wore through the printing on the keys, I bought stickers with the letters on them. Then, I wore right through the stickers. Finally, one of the keys gave out completely and it wasn't the one you might think. The letter E is the most common letter used in English (as in the word English itself). However, the keys on a keyboard that are used most often are the spacebar and the backspace key.

It was none of those and I didn't discover the issue until, one day, I couldn't log into one of the programs I use for work. I tried three times until I was forced to "forget my password" and create another one. That's when I figured out that one of the keys involved in my password was no longer working.

I tried cleaning the keyboard with compressed air. I tried removing the key - like lifting the hood and peering inside as if the problem will be obvious to someone who knows nothing about what she is looking at. It would work if I poked at the vacant spot with my pen cap but not when I replaced the key unless I pressed it pretty hard.

I could have made it work. I mean, why not? There's only about eight weeks left in Tax Season, Part II. But I gave in. 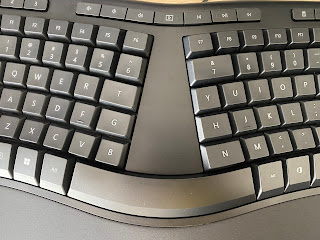 This one is actually quieter and it feels like the keys are a teeny bit smaller. Plus, I don't need to press the keys quite so hard to make them work. Does that mean they'll last longer? For now, what it means is I'm making quite a few typos so I'm having to use the backspace key a lot.

It's good thing that key doesn't get used in passwords.

Hubby complained there was a good amount of hair on the floor of the bathroom. He said he was going to use the Swiffer to clean it up (no doubt wanting to be recognized for being helpful without having been asked). However, he told me, the Swiffer didn't have a pad and he didn't know where I kept them (meaning it wasn't his fault he couldn't be helpful but he deserved the credit for thinking of it).

"You bent down and picked it up?" I asked.

"No. I turned off the bathroom light so I couldn't see it anymore.

You know the people who stand on an airport tarmac with those orange wands? They always look bored. And there are only about two positions I ever see them in: arms over their head with the wands crossed like an X or arms waving the wands in a "come this way" gesture like the guy at the car wash. (Only the guy at the car wash doesn't have orange wands which makes me wonder what if he did have orange wands?)
Upon arriving at my final destination and taxing to the gate, one such tarmac person raised an arm to scratch his nose with the back of his hand. I thought, "What's going to happen now? Will we arrive at the wrong gate? Or, worse yet, crash?"
What if that person broke out in some sort of dance like the dancing traffic cop who inevitably get caught on video and make everyone smile? What if all of them were dancing?
Would all hell break loose? Their jobs would be less boring, that's for sure. Right up to the point when they are arrested. (I suppose the FAA takes these things more seriously than NYC, for example.)
Just once, I would like to see what would happen. I want to see one of those tarmac dudes bust a move.
Just once.
No comments: