I don't think I need to eat again until December.
No comments: Links to this post

All I want for Christmas is a colonoscopy.

I received one of those medical maintenance reminder letters from my healthcare provider and after having put it off for a reasonable amount of time, I phoned in to order a stool sample kit per the instructions. "Oh, no," I was told. "You don't need a stool sample kit. You're overdue for a colonoscopy."

She was right, of course, but I was hoping the rules had changed and I wasn't due until next year. Or maybe five years from now.

I was tricked, I tell you.

While the year has had it's ups and downs, it's official: 2017 was shitty in the end.
No comments: Links to this post

Are you one of those people who gets up at O'Dark Thirty to find holiday bargains before the sun comes up? Not me, that's what online shopping is for. I'm still in bed. Right now. With coffee in one  hand and my Washington Beer Lovers map in the other. I have all morning to plan my afternoon.

But if you're one for standing in line, hustle over to Binny's in Chicago to buy Goose Island's Bourbon County Brand Stout. This Beer Could Be the Biggest Black Friday Deal of All - says Fortune.

Breweries all over the country have special releases on Black Friday. Food & Wine's Black Friday Is a Big Beer Shopping Day, Too:

If I'm going to stand in line today, getting a beer at the end of it sounds just fine to me. A black ale, even better. As for the rest of you, good luck out there. I hope you find what you're looking for.
No comments: Links to this post

If you're considering pairing beer with your Thanksgiving meal, The New York Times offers helpful suggestions in To Pair With That Thanksgiving Bird, Consider Beer:


" In all the meticulous course planning for Thanksgiving, wine tends to get top billing on the beverage list. But beer — with its versatility, approachability, carbonation and broad range of flavors — may be just as happy a pairing. "

Their simple explanations and easy to follow pairings makes trying beer with this traditional meal an appealing idea. However, I might try a Porter rather than an Imperial Stout with dessert, as they suggest, as it might be less alcohol, less sweet, and incorporate more coffee notes to offset the sweetness of pumpkin or pecan pie. Besides, it starts with "P...."

GQ offers a different take, offering beer pairings for everything on your Thanksgiving table. If you're considering serving mash potatoes, stuffing, and cranberry sauce as separate courses, check out GQ's Thanksgiving Beer Pairings.

Of course, why serve food at all when you can serve beer that tastes like food? How to Enjoy Thanksgiving Dinner Entirely in Beer Form from Food & Wine sets out to create a Thanksgiving feast entirely in beer form. Their results included this:


" . . . . Brussels sprouts. Only one example popped up from a small Canadian brewery called StoneHammer Brewing in Guelph, Ontario. Wurst Idea Ever Brussels Sprout Sour was a one-off experiment from way back in 2012, and the name might explain why other brewers haven’t delved into Brussels sprouts as an ingredient. Though the people behind that wild idea are no longer with the brewery, a current representative said that the next year, they went so far as to brew a beer called “Soury About Last Year” for the same event. "

Cider might be an excellent way to go for Thanksgiving - a happy middle ground between wine and beer but I lack any suggestions here. Seattle Times Surprise family with something new for Thanksgiving: craft cider offered some beautiful and enticing suggestions but left my head spinning. Best to find an expert at a local bottle shop or head to your favorite cidery for suggestions.

In any case, eat, drink, and be merry. And be thankful for whatever's in the glass.


As you can see, the living room is getting better while my camera phone is not. Genius Bar appointment is Saturday. We'll see....
No comments: Links to this post 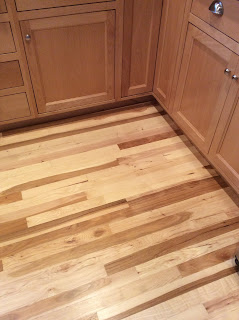 Had hardwood floors installed while we were away, recently, and they turned out nicely. The rest of the house, unfortunately, was destroyed. The contractors were very nice to drape the kitchen cabinets but they didn't drape anything else. Dust was everywhere. They ruined the carpeting in two rooms (that they weren't even supposed to be in) and one Persian throw rug. It took me three days and countless loads of laundry before it was habitable again.

Meanwhile, I'm on to my third iPhone in as many months. Not exactly but almost. I went swimming with one in July. It didn't survive so I got a new one on July 26. The new one stopped working - just died - so it got replaced with a replacement on September 7. I started noticing that my replacement phone wasn't taking very good pictures. I was disappointed because I thought the new iPhone was supposed to take awesome pictures but I didn't know what the problem was. More than a week ago, I noticed the replacement phone's camera lens has a hole in it. 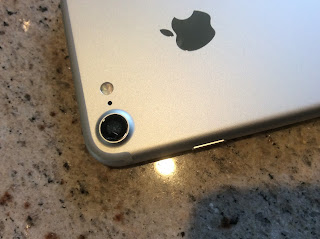 Maybe I dropped it. If I did, it wasn't one of those spectacular, yard sale, kind of things. Nothing notable. The rest of the phone is in perfect condition. Not a scratch on it. Anywhere. Looking at my photos, the lens broke around September 17-19. The last clear photo is the 17th and the first fuzzy one is the 19th. I was in Seattle on the 17th, Portland on the 18th, and home on the 19th.

I went to the Apple store in Portland and they told me the camera lens can't be repaired. The phone has to be replaced. A quick internet search indicates otherwise.

In other news, I've spotted the first ugly holiday sweater of the season and it wasn't even mine. Also, a neighbor already has holiday decorations up. For Christmas, not Thanksgiving.

Finally, if you're near a McMenamins try a Black Spider Porter if you can still find it. It's generally available from October 15-31 but we were able to find it just this last weekend (on tap and in cans). With Black and Roast Malts, it's a robust and eerily delicious brew.