After a lazy morning yesterday, Hubby and I approached each other with "What do you want to do now?"

I answered, "Well, we could go to a movie or maybe take a handgun lesson."

These words have never before formed in my mind, much less come out of my mouth. I don't have any desire to own a handgun and have only had a mild curiosity about how to handle one. We discussed movie options, a possible hike, a quick day trip to a winery but by the time I got out of the shower, we had an appointment with an instructor at the local gun range.

It was a little nerve wracking since I've never even handled a handgun before. I've only (knowingly) been in a room with one a couple of times. Yet, here we were. We started with classroom instruction that covered safety, range rules, stance, grip, and aiming before even handling a weapon. 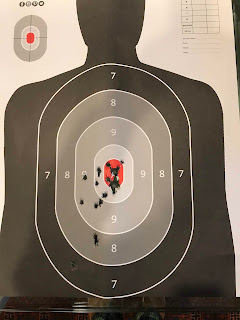 Our instructor chose a Glock 17 for us to try and we headed to the range where we covered the mechanics of the gun before even loading it. I felt calm even as my hands shook. The noise didn't bother me. I wan't afraid of the recoil, although I found myself anticipating it at times, and I wasn't worried about the shells as they were ejected from the gun. I just tried to take it all in- intellectualize it all - yet the adrenaline found its way to my sweaty palms.

In the end, I had fun -  a word that feels funny to use in the context of lethal weapons. Using firearms responsibly should never be trivialized. That being said, I felt badass. I did something that I was uncomfortable doing. I learned something. And, I did well.

I'll probably go back but I still don't want to own a gun. And I'm just as interested in taking a traditional self-defense class. (My alter ego is a ninja.)

So maybe range shooting wasn't a very Christmas-y activity and it did nothing to get me ready to celebrate the holiday. (Now that I mention that, what does that even mean? Why does anyone need to get ready?) But, I'll grin the next time I hear the song, "You better watch out..." because this Grandma is a badass!

Good for you! My son was a police officer for 10 years - I should probably get him to give me a lesson.

I enjoyed going shooting too when I did it.
My mom's boyfriend wants to take her shooting, I will be interested to see if/when that happens.