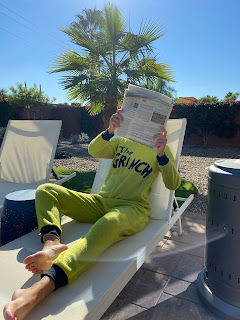 It's only December 5 and the Grinch has already been sighted. Shortly after this image was taken, it's reported that the photographer was escorted off an undisclosed Palm Springs area resort.

A witness to the event, who was not authorized to speak about it, said that "Grinchy" (as the woman identified him) often vacationed in the desert area prior to the holidays. "He just wants to be left alone," she said while a small dog cowered in the background.

It's reported that once identified, the Grinch lunged at the photographer vowing his Christmas would be the first to be ruined if the Grinch had anything to say about it. An altercation ensued which included the dog, the Grinch, the photographer, and one unfortunate waiter. Amid the chaos, the photographer's camera and nose were broken while the dog lapped up mojitos spilled during the melee.

Resort staff requested the resort not be identified stating it was for "obvious reasons." A statement was later issued by the resort management:

While it is unfortunate that paparazzi found access onto resort property, we continue to assure guests - both beloved and despised -  that guest privacy and safety is of paramount concern. We strive to provide a relaxing atmosphere for all our guests especially as preparations are made for the holidays. We understand that not everyone feels all warm and cozy at this time of year. However, we hope that this incident will not have a negative effect on the presents currently stacked under the tree in our grand lobby. (It is with great hesitation that we remind our guests that pets are not allowed.)

It is unclear whether the photographer will press charges against the Grinch. Meanwhile, the Grinch remains a guest of the resort.

While the the Grinch receives overwhelmingly negative press (in this and other publications), it should be noted that he has his supporters. As soon as news of his presence was leaked, a small protest of sorts was launched in downtown Palm Springs. The group, made up of children and adults with large ears, buck teeth, and strange hairstyles sang nonsensical lyrics while holding hands. The apparent leader, who was identified only as Cindy Lou, stood in the middle and held a sign that read, "Even the Grinch has a heart. You should too."

What a strange story!