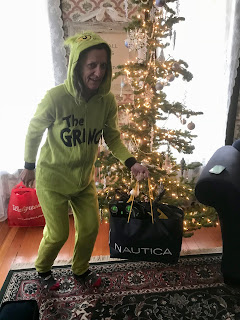 I was recently at a garage sale where I discovered, hidden behind a door, a red suit with white trim. Oh, yes, you know of what I speak. All I need is a dog named Max and a sleigh and I will be in business. I can't believe my good fortune!

Yesterday was the deadline requiring travelers to have a driver's license that complies with the REAL ID Act in order to board commercial flights.

The REAL ID Act was passed in 2005 and was intended to set minimum security standards for license issuance. The purposes covered by the Act are: accessing Federal facilities, entering nuclear power plants, and, no sooner than 2016, boarding federally regulated commercial aircraft.

Starting January 22, 2018, travelers who did not have a license from a compliant state or a state that has been granted an extension would be asked to provide alternate identification. If the travelers could not provide an acceptable form of identification, they would not be permitted through the security checkpoint. Even still, enforcement doesn't start until:
Clear as mud, right?

This map will help.
No comments:

What Happens at the IRS During a Government Shutdown?

This document tells you, exactly.

But, your taxes are still due.
No comments:

I’ve never worked so hard to get a camera shoved up my ass! Listen, people, I don’t really want to do it either but you’re the ones that said it’s time.


Sometime last fall, I got a checklist of maintenance items from my doctor: when to get a mammogram, when to get a flu shot, time to order my annual stool sample kit to check for early signs of colon cancer. “Please call this number….”


Since Hubby has had one, I was aware of the preparation involved for such a procedure and asked if she could schedule an appointment with a GI close to my home which is outside of my coverage area. (We're talking about Kaiser here and although Kaiser is in Seattle as well as Portland, those are considered different coverage areas. My plan originated in Seattle but I live in Portland.)


I was then referred to a local Nurse who said she could schedule me for a colonoscopy but since I didn’t have a local primary care physician, I would have to see one first. I explained that I already had one but fine, whatever, I would happily see ANYONE who could get this done.

Well, in that case....*hold music* Click, click, click. The nurse said I didn't really need to see someone after all. All she needed to do was send a “fit test kit.” What are they fitting me for? Ew. But fine. Send it.


Today, I went to the mailbox and retrieved the package. I opened it up and it was a freaking stool sample kit!

This is turning into a major you-know-what.

(Turns out a "fit" stands for fecal immunochoemical test which was somewhat of a relief but not sure we can call that a silver lining.)

During intermission at a recent event, I asked an usher on the balcony level of the theater if there were any bathrooms on that floor. She replied that yes there were, although most were on the first floor. (The location of the second floor bathrooms was not offered.)


Last week, at a local brewery, a woman sat next to us at the bar and proceeded to tell us that she lived with her mom. Her cat was dying. She’s as light as an owl. (We don't know whether she was talking about the cat or her mom at this point or how she might know how much an owl weighs.)


Yesterday's walk featured a beautiful sunrise. We saw several photographers on the trail and one women, wrapped in a blanket, still in her pajamas, sitting on a park bench just to take in the view.


We walked the trail along the river for a short while with an elderly, but active, neighbor who proceeded to tell us this joke:

A man was in the company of a woman who was the wife of another man
when, all of a sudden, he heard the telltale sound of a key in the door.
The woman told him to leave by way of the bedroom window.
Luckily for the man, it was a first floor bedroom.
Unluckily for the man, he left without his clothes
and it was raining.

It was early in the morning, and he was only a couple of miles from home
so he decided to jog.
All was well until he came upon a group of joggers.
Eventually, he caught up to them and joined their ranks.

The woman next to him kept glancing his way and eventually asked,
"Do you usually jog in the nude?"
"Oh, yes," he replied, "it's quite natural. I usually jog early in the morning and didn't expect to see anyone else."

This seemed to satisfy her. Yet as they continued on she began to steal glances his way again.
"Do you always jog while wearing a condom?" she asked.
"Oh, no," he replied,
"Only when it's raining."

We have lovely neighbors.

It's a Cancer Thing

Someone asked me once why I wear mismatched socks. "It's a cancer thing," I answered, pretty much ending the conversation. 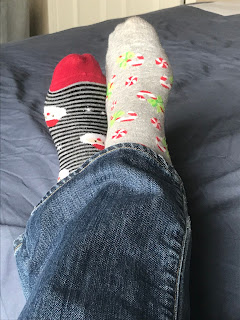 It started with my uncle who, after starting aggressive treatment for his cancer, started the practice. It caught on with his doctors, nurses, and family members as a way to keep things light in the face of a dire reality.

I still wear mismatched socks even though he's no longer with us. Now, it's more than a "cancer thing." Now, I do it to remember him and all the people we've lost to cancer - far too many people. It also reminds me to keep things light.

Cancer sucks and the reality is some people make it and some people don't but we have to remember that we're all in this together - this business of life and all that goes with it, including cancer. We need to help each other through it all. Sometimes, that's with humor or a smile. I wear mismatched socks to help me get through the stuff that's not much fun.

Today, I'm wearing mismatched holiday socks. Today, it's about not wanting to fold the laundry (people do fold socks, don't they?) so I grabbed a couple of clean ones out of the laundry basket.

This is what I pulled out and it makes me happy.

I've lost people to cancer. I know you have, too. Mismatched socks won't change that but maybe they'll make you feel better for at least a moment.
No comments: