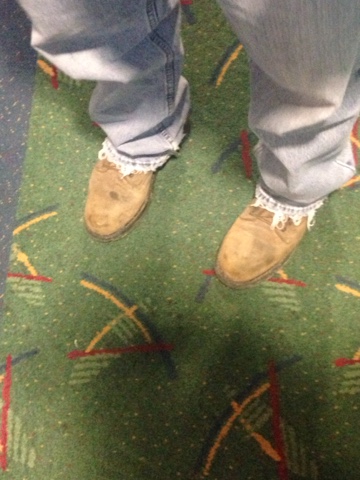 Good Time To Be In Seattle

Dangerous “Kissing Bug” Making Comeback In The U.S., Including Ohio


" The kissing bug is making a comeback across the U.S., including the Buckeye State. The name sounds cute, but a bite from this bug can be deadly. "

Sometimes, I feel like Bob Cratchit. I don't copy letters, though. I copy numbers.

My occupation is slightly more glamorous than that of an IRS auditor. Slightly. I work in a cold office with buzzing fluorescent lights overhead, rubbing my hands together and wishing I had a space heater.

My job is dull. I work alone and speak to no one, copying numbers from this place to that place and making sure they add up. Right this very second, I'm wearing two sweaters and wondering where I can get fingerless gloves.

Come to think of it, I just saw some at Costco and wondered who would ever want those? Bob, that's who. It came with a matching hat and scarf, too. It's only a mile from here and only lightly raining. I can make it there in about twenty minutes. And, wouldn't you know? There's a Starbucks across the street. 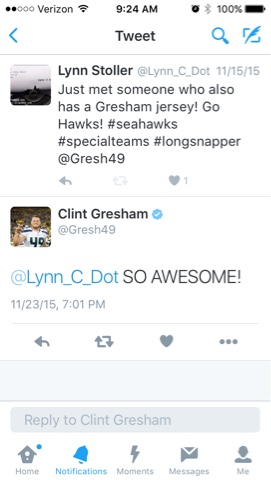 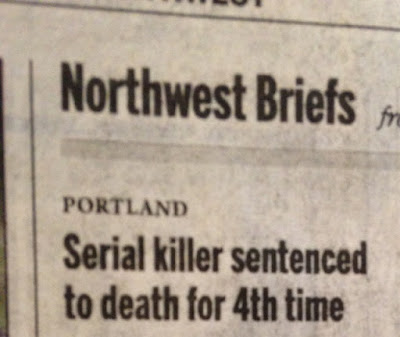 I met someone today who has a Seahawks Gresham jersey. No, really. She wasn't wearing it, I have to point out. She was wearing #3 Wilson (I hear he's popular) but I was wearing my #49. She approached me and asked why I had this particular jersey. It was a reasonable question considering not many know who Gresham is much less what position he plays - even after I tell them!
Turns out her name is Gresham. I'm not sure she knows what a long snapper is. I think she just liked the name. Still, that's two. I think the Gresham fan club is on a roll.
In other news, a crow dropped an anvil on our car yesterday. That's why it sounded like anyway. BOOM! I have no idea what hit us but it was startling. In the rear view mirror, I could see a crow in the street picking up whatever it had lost. It might not have been an anvil but it was big enough to leave a good sized dimple in the roof of the car. Anyway, It couldn't have possibly been edible.
This reminds me of a completely unrelated story I've been meaning to tell. It happened last August so stop me if you've already heard it. We were docked in Kingston and a seagull was on the finger pier next to us trying to eat a starfish. The seagull would pick the starfish up in its beak and try to swallow the starfish whole but the starfish was too wide. It would drop the starfish on the dock, reposition, and try again.
Time after time, the starfish prevailed by being simply too wide to pass by the mouth of the seagull. But then, something happened. I looked away for only a moment but when I looked again the starfish was lodged in the seagull's throat. It looked just like you would imagine - a seagull with a starfish in its throat.
The seagull did not look happy for its efforts. It looked rather embarrassed. Still, it tried to appear nonchalant in front of the other gulls. (What, this? It's nothing. I just got something caught in my throat.)
I don't know how the seagull fared in the end - we went ashore and grabbed some lunch at that point - and I don't know what this story has to do with the Seahawks. But let it be a lesson to you, whatever that is.
No comments: Links to this post

Is a hot dog a sandwich? Council rules once and for all - USA Today


" "Limiting the hot dog's significance by saying it's 'just a sandwich' is like calling the Dalai Lama 'just a guy.' "

I used to hold the record in my sorority for eating the most hot dogs at once - 13 - although not all of them were with buns. Who knows? Maybe I still do.
No comments: Links to this post

As if I needed another distraction. . . .

See? I just did it! I had to go to the site to get the link, didn't I, and then what happened? That was an hour ago! If that wasn't bad enough, I've downloaded it to my Apple devices. Now, I can avoid all kinds of work for hours at a time.

I found the link on the KenKen website, another terrific time waster. KenKen calls 2048, ". . . the Candy Crush for math geeks!"

How could I resist?
No comments: Links to this post

Personally, I think this should be #1 on International Business Times' National Novel Writing Month Rules 2015: 10 Tips For A Successful NaNoWriMo although the other nine tips are pretty good.

I noticed that coffee wasn't part of this list which is a huge omission. (You can't drink wine all day, can you? Wait, can you?) I'm not sure there would be any literature at all without coffee. Coffee houses are made for writing. First of all, there's coffee if I didn't mention it before. There are often comfortable chairs and sometimes a fireplace. There's always a window on the world. Just sitting in a cafe inspires. Plus, coffee houses usually have free WiFi.

I'm not talking about Starbucks here. You know how I feel about the Green Siren but November is also a great month to check out your local coffee purveyors. There's usually one right next door or up the block from the Mermaid. They usually have a more relaxed vibe, your local coffee house, good music, and interesting patrons. Some might say they even have better coffee but I'm staying out of that.

If you've ever thought about writing anything - doesn't have to be a novel - this is a great exercise in the practice of writing. Writing takes practice and NaNoWriMo is a great place to get started. It's daunting, yes, but so is writing a novel. You have to start somewhere and if you're like me, then having goals and a schedule work best.

I've written a couple of novels this way - if you count lots of lots of words strung together in a more-or-less cohesive manner a novel. The years I haven't participated in NaNo, I've threatened to go back and edit these constructs into something that might resemble something a person might want to read. This is one of those years, one where I'll use "editing" as an excuse for Not Writing. Editing probably won't happen either but that doesn't mean I don't think about it. (And, it's the thought that counts, remember?)

I'm going to think about it some more over a cup of coffee. And if nothing happens, I'll think about it over a glass of wine.
No comments: Links to this post