My short stint as a mule

I discovered two things recently: First, that some Walgreens locations will dispose of your expired or unused prescription or over-the-counter medicines. Second, that I had a lot of unused or expired medicine.

While reorganizing our bathrooms and hall closets, I found all sorts of old cold medicines, pain killers and anti-inflammatories, and toxic opioids that had been prescribed after past surgeries. It was surprising, when amassed together, how much there was.

Flushing these medicines down the toilet introduces them to our water supply. Similarly, throwing them in the trash not only adds drugs to our soil and water, they can be potentially dangerous to anyone who might otherwise get their hands on them. Nevertheless, the FDA informs that it is possible to flush or throw away unused drugs if a drug take back program is not available. Had I known this, I might not have sought out Walgreens. And, having found Walgreens, I might have paid a little more attention to the information on their website.

Somehow, I got it in my head that the disposal site was nothing more than a cardboard box with markings that identified its purpose. The many reasons that would be a ridiculous idea never occurred to me not the least of which being that anyone could have reached into a cardboard box and taken out a random handful of drugs. Instead, and rightfully so, the box was more like a mailbox with a one-way slot making it possible to deposit but not withdraw.

Considering I was about to haul in a bag of drugs into a Walgreens - or anywhere else for that matter - I decided to put my thin plastic bag of goodies into a reusable grocery bag thinking that was far more discreet. Again, not considering the obvious reasons for not doing this, I was disappointed that the imagined open-top cardboard box was not prominently displayed by the front door like the RedBox machine. This was not a situation where I could just walk in with a bag of drugs, drop them, and then turn around and leave. No, I had to walk through the store to the back where the mailbox style receptacle was located, near the Pharmacy.

Of course, that makes perfect sense as does the fact that there's always two lines at the Pharmacy. One for ordering, one for pickup. There were only a half dozen people waiting as I made my way to the box. Addressing one gentleman, I stupidly asked if he was waiting. For what, I asked myself later, I don't know. The drug box? Nothing else he might have been waiting for made any difference to my purpose unless he was waiting for a woman with a bag of drugs to walk up looking to give them away as if it was Halloween.

In any case, he wasn't waiting, so I proceeded with my deposit. One hand being occupied with holding the grocery bag that contained a second bag which contained the drugs, I could make my deposit only with the other hand. I reached for an orange bottle of pills and put it in the slot and heard it rattle to the bottom of an empty metal drum. I reached for the next item. And the next. And the next. (Expired NyQuil makes a particularly loud thump.) At one point a lone, unidentifiable capsule still in its impenetrable bubble wrap fell to the floor and I thought for a split second that I could just ignore it and leave it there but was sure at this point that I had the full attention of anyone who was waiting in line to pay money for some of the drugs I was throwing away while simultaneously wondering how it was a person could have that much to get rid of.

Instead of pointing out the hypocrisy of my imagined accusers, I scooped up the lone pill and dropped it in the box. I turned to go and thought - perhaps for the first time - that I was damned glad I was wearing a mask.

" The bathroom is a place of social and environmental politics. A single company, owned by Koch Industries, controls 29% of the tissue paper market in North America. With the purchase of fluffy, plastic-wrapped, bleach-white rolls, many Americans are unwittingly aiding in the politically-conservative efforts of conglomerates like Koch Industries, which has funneled millions of dollars into voter suppression, the aiding and growth of the Prison Industrial Complex, and the reversal of common-sense environmental protections. "

Seems like a serious statement for an exhibit at the Marta gallery featuring over 50 toilet paper holders.

I bought three of these calendars. I kept one for myself and gave two away as Christmas presents last year. But then, we put our house on the market so mine went into a box and was never hung on the wall.
We bought a new home in a different state early in 2020 but before we could come home and collect our belongs (which we put in storage after our first home sold), COVID happened. Fortunately, the place we purchased was fully furnished so there wasn't much to retrieve other than clothes, some small kitchen appliances, and items of sentimental value.
It wasn't until September until we defied stay-at-home orders. We drove 1,100 miles, rented a small truck, and trekked back to our new home - a car plus the truck - through some of the worst wildfires the western United States has ever seen.
And, still, most of it remains in boxes. First, we wanted to get some work done around the house. We converted all of our lighting to LED and added ceiling fans and we had the interior completely repainted. Only now are we starting to unpack after living in the same clothes since February.
Hubby unpacked this calendar just last week. It hasn't been hung for nearly 10 months of 2020. Seeing as I can pre-order my 2021 calendar (which includes September-December of the previous year), I'm not sure there's any reason to even take this out of it's cellophane.
Instead, I plan to donate it Goodwill and mark it:

I wished I lived in a place where the most serious problem is "What is bread?"

Justice O’Donnell, wrote, “This seems a very cumbersome and unnatural description of a hot meatball sandwich. Arguments like this induce some sympathy for the beleaguered draftspersons and for the tortured language to which they sometimes have to resort in order to carry into effect a reasonable statutory policy.” And with that, he dismissed the appeal.

Read all about it.

What the heck is this? 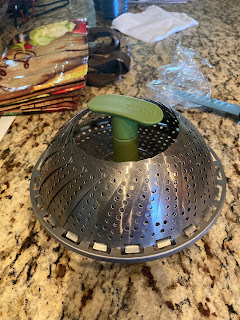 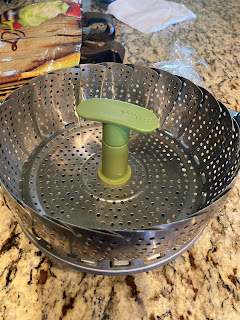 In all my years, I had never know what this was. A strainer? A steamer? What's a steamer? Why does it have petals that open or close? Why are there folding legs?

I would see this thing in other kitchens and wonder what it could possibly be used for. In a pinch, I'm sure I've used it as a strainer but I couldn't fathom what one would steam in it and, more importantly, why.

The answer, recently, came to me when I discovered that store which is another phenomenon I never understood. (It has been recently criticized as being racist in its branding, ergo "that store"). People who loved it, absolutely loved it. Yet when I went in, I didn't recognize any of its products. Where were all my favorites?

When the pandemic hit, lines would form outside their stores when one could easily enter any big brand store without fuss (other than a mask, hand sanitizer, wipes, distancing, etc.). So what was the big deal?

Until one day, I found myself in that store and I bought a bag of frozen potstickers which is nothing, in and of itself, but that's what brings these two discoveries together: on the directions for the potstickers. "Place frozen potstickers seam side up in a steamer basket over boiling water...."

Eureka! Everything clicked into place and I had amazing potstickers as well as a use for the spaceship-looking object that lurked at the back of my kitchen cabinet. (It came with the place when I bought it as did a waffle iron which is a whole different delight.)

Here's the real Ah ha! moment: I learned I could steam eggs in it. Okay, why is that an Ah ha! moment? Because, the eggs turn out great and they're easy to peel. Boom! No expensive kitchen appliances needed! Just a little boiling water and this folding spaceship thing.

I guess I could steam vegetables in there but, then again, who would do that?

Closed due to pandemic

Why it's important to have beer in your fridge

Fridays.
Ah, but it's more than that. A well stocked fridge is more energy efficient. Just think - the more beer you buy, the more you save! If the beer is cold when you buy it, so much the better.
Here's why: stuff in the fridge displaces the air that would otherwise be filling that space. The less air exchange each time you open the door, the easier it is for the refrigerator to maintain a constant temperature. During the hot summer months, it's even more critical to have beer in the fridge.
Tomorrow is Friday so today is a good day to stop by your local brewery to stock up. And, remember to get some more on Monday to keep your refrigerator working efficiently because the more you save, the more you beer you can buy. The more beer you buy, the more you save.
Doesn't get much better than that.
No comments: