What's the proper burial procedure for a pair of jean? Not just any pair of jeans, but jeans you plain wore out? Jeans that look like this: 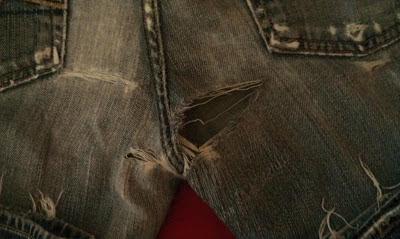 I don't remember the exact moment when this last event happened but if you look very closely, there are five holes in the back of this pair of jeans. Two on the left, an obvious opening on the right, a small tear just below the right pocket, and a one on the right below the largest of holes. This one was professionally repaired some years ago.

No kidding. I sent them to Denim Therapy for repair. I remember when I sent them the guy at the Post Office wondered what kind of problems my pants could have that might require that I ship them to New York for therapy. That repair job gave me several more years in this pair of jeans.

But the end was near. I knew I couldn't send them to New York for therapy every time they fell apart. So I did what I could to keep it all together, uncomfortable as it could be at times.

My homemade remedies made things difficult. To walk, especially, or sit. This is what it was like for my jeans. On the inside: 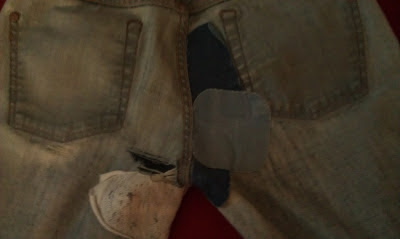 Now that it's over, how does one pay proper respect? I have one vote for Daisy Dukes but that's not fair to anyone, imo, although it might fuel a fantasy or two.

Maybe I can salvage parts. Harvest the pockets for a pair of jeans incapable of carrying items. Donate the zipper to one who needs closure, rivets to another who needs strength. My jeans could live on through others.

Maybe I'm the one who needs therapy.
No comments: Links to this post

Someone Left a Cat Out in the Rain

That's the lyric, isn't it? Because, otherwise, it wouldn't make any sense.

But, in fact, that's exactly what happened today. I was doing laundry (one might think that's all I ever do) and it was raining. As I was coming out of the laundry room in the next building over, a striped cat decided it was coming in. It headed straight for a second floor apartment and mewed to be let it.

Except no one was home. What was I to do? Leave it in the hallway of the apartment building? I encouraged it to leave only it darted for the basement. I wasn't about to chase it. It was already wet and angry at not being let into its apartment. Instead, I opened the exterior door and called to it sweetly.

It peered at me from around the corner of the down staircase with a look of "Are you kidding?" My return stare said, "Come play with me. I have string."

The unnamed cat's eyes queried, "Really? Don't mess with me." In reply, I tapped my fingernails on the tile floor with "Yes, and so much more."

The cat believed me and, after a time, left the building of its own accord but of course that's where it ended. It looked at me with expectation in the rain and all I could say was, "I'm sorry."

In and out of the laundry room I went but I was wise to the cat now and didn't let it in. And it rained all day. Each time I came and went - whether it was to the laundry or elsewhere - the cat gave me a look of "You betrayed me."

And it's true. I left the cat out in the rain.
No comments: Links to this post

Travelling home from Port Ludlow, we necessarily needed to pass through the locks to get to our home port. It was an ebb tide as we tied up under the Salmon Bay Bridge and waited in the rain for our chance to lock through. About an hour passed before the light on the small locks turned green at which precise moment our fearless Captain noticed the boat was listing.

The water level had dropped, by my estimation, a foot while we were waiting. We were hung up on our lines which, by the way, were sopping wet and holding fast. Fortunately, we were able to loosen the lines without losing any fingers or having to cut them away (the lines, not our fingers) - and before our cleats tore away. However, the barnacles encrusting the wall to which we were fastened did a pretty good number slicing through our blue gel coat.

Everything worked out fine but I was surprised at how quickly the water level dropped in such a short period of time. It could have been worse.

The unit for which we had hoped to apply got rented before we got our application in. Still looking....

Someone mentioned to me over the weekend I should write a gossip column for the yacht club. I'm thinking about calling it Three Sheets.
No comments: Links to this post

I think we found a place. It will definitely be bigger but, of course, it would be difficult to find anything smaller. And, it will be more expensive but, again, it would be hard to find something as inexpensive. It'll be nice to have a kitchen big enough that I can't touch all four walls all at the same time. There's a pool and a workout room and I won't have to lug my laundry in the rain anymore. There's also a half-mile walking trail but it doesn't go anywhere. In fact, the new place isn't close to anything, except work. Oh, wait. Maybe we should rethink this.
No comments: Links to this post

We have to move. The guy who owns the condo that we're renting in Vancouver wants his place back so he's asked us to move out by July 1. It's exhausting looking for new digs, especially when we're only here for a few days per week and somewhere in there I'm also supposed to be getting some work done. This weekend is Memorial Day Weekend so I'm also trying to get ready for that. We're boating to Port Ludlow and I'm trying to get some of the food prepared in advanced.

The good news is that we really don't have to make a speedy decision. We can always spend a month or two in a hotel until we find something we really like. The problem is that absolutely every other place is bigger (which is a good thing) but it's also more expensive and less desirably situated. Vancouver has lots of apartment inventory to choose from but there are very limited options in the downtown area where we are now.

Now, I can walk to more coffee shops than I can count, two of which are Starbucks. There are two movie theaters (one of the blockbuster variety, the other of the historical artsy-fartsy variety), plenty of restaurant choices, a Red Box, a national park, the library, and the Columbia River - all within walking distance. The grocery store is just out of walking range but there's a nice store nearby. The location is unrivaled, and absolutely unavailable at the rent we are currently paying.

Bigger might be nicer, but that means we have to buy or rent more furniture and there's more to take care of. I'll get laundry in my new apartment which will be a huge bonus, but I have stacks of quarters that have been amassed and are all queued up and ready to go. What will become of those? 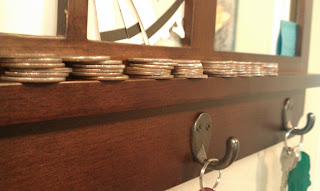 Perhaps, in our new place, my socks will be less likely to defect.
1 comment: Links to this post

Is it me? Or, did my shoes raise a stink? Because, my socks want out. Recently, and I'm talking in the last year or so, my socks have been making increasingly more daring attempts at escaping the laundry cycle and I'm left to wonder why. This trend commenced when I started using a coin-op for laundry (which may be my answer right there). I can certainly understand my undergarment's distaste for a poor man's laundry facility, snooty undergarments that they are, but I don't always use coin-op. Indeed, I only use it half the time. That being said, I have never witnessed such brazen attempts at home where pocket change comes out of the laundry and is not required, in fact, to operate it.

Something is definitely afoot.
No comments: Links to this post

They must not be that much fun. 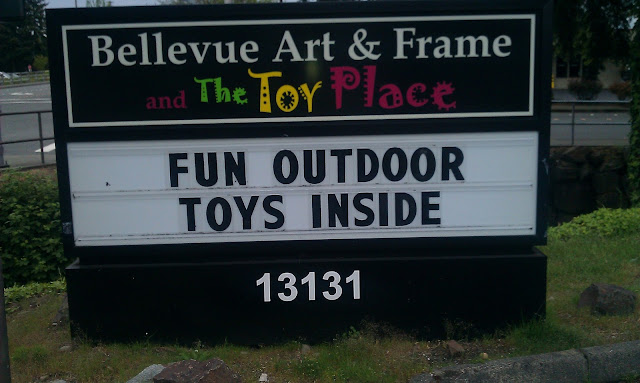