Reentry will be rough. 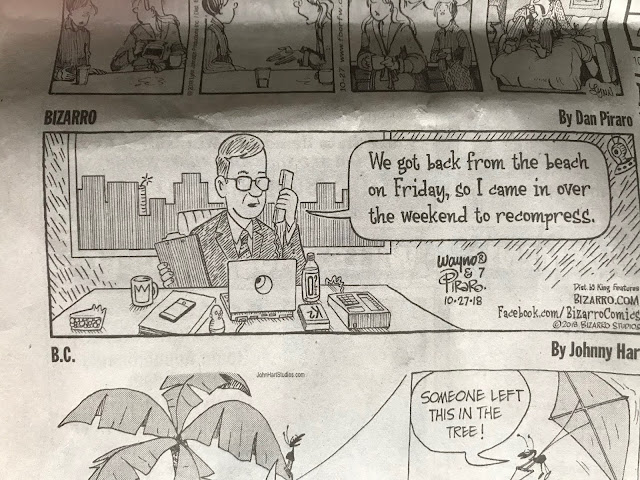 I figure a tan must weigh something because what else could account for weight gain on vacation? (Sand in your pockets??)
No comments: Links to this post

Yesterday was our first real soaker of the year. It rained all day. Consequently, it was the first day we ran the heat. Summer is over, my friends.

The window in my office space faces east so I get wonderful light in the mornings, even if filtered through drizzle. The overhead light is dismal so I use it only when necessary which will be the case, more and more, in coming days.

Good thing I'm going to the beach in a couple of weeks and have a good book to bring with me. I think I should stay there until, maybe, March. That should do it.
No comments: Links to this post

I had the greatest birthday ever. Even better than the one I had fifty years ago in the back yard of the family home with all the neighborhood kids in attendance, clowns, jugglers, a pony. (Okay, that never happened. I'm just saying my birthday was even better than that.)

Birthday greetings started the day before and lasted until well into the day after. I had no idea I had so many friends! Even if FB had to remind you to think of me, I appreciate it. It was nice to hear from so many people and I felt loved. Thank you.

I also got a free movie from Redbox and a free coffee from Starbucks. The former is available to redeem anytime in the next month which is as it should be. 'Bucks, however, required that I drink my birthday coffee on my actually birthday.

I was not going to pass by a free cup of coffee, even though I have been under the weather ever since a recent visit to the vibrant vacation destination of Des Moines. On my birthday, I had been, unshowered, in my pajamas for four days, greasy and smelly, but I went. Too bad for you, Starbucks! I got my coffee!

Thus energized, I later showered and dressed (you're welcome) and accepted an invitation to a home-cooked meal at the home of a retired Coast Guard chef. I donned a surgical mask and brought extras for the kids. Just in case.

It was the best meal I'd had in days after surviving on canned chili, canned chicken soup, Triscuits, and potato chips. Perhaps not the healthiest food, it was food for comfort and all I could muster.

Another friend, thinking to surprise me, asked Hubby what kind of cake I like. He responded ANY. And, so, she brought four quarter cakes arranged as one: chocolate, caramel, red velvet, and carrot. I ate them all.

My stomach was stretched and bloated to the point I thought it would explode. I carried it home in both hands, groaning in uncomfortable, sated pleasure. The following morning, my scale treated me with a lie so sweet: it said I was light as a feather, despite a body shape that suggested otherwise.

I'm still under the weather. My nose is producing more snot than I thought humanly possible but at least I am sleeping through the night and I am maintaining a hygiene routine. My hands are chapped for all their washing. And I'm busy at work as we head into the extended federal tax deadline.

But, I'm happy and that's all anyone can hope for. Thank you for helping to make my day special. I hope you're having a great day, too.
No comments: Links to this post