There comes a time when work can no longer be avoided.

In Box is full.


"i've got so many customers i don't have no time" [lyric just heard on the radio, artist unknown]

Stick Up! or Hung Out to Dry? 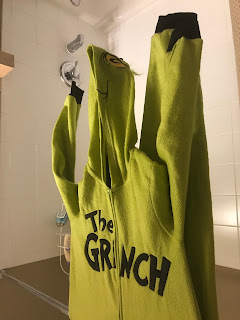 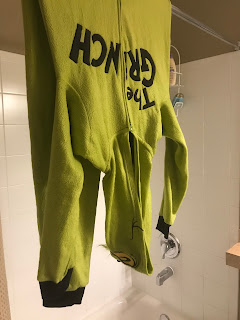 The Ethernet adapter worked at home and came in handy when I lost power at work yesterday. Or, it might have. I had enough battery power in my laptop to keep working but lost WiFi. I don't know if I lost internet altogether because the power was restored before I could connect laptop-wise - but, cool, in concept.

Haven't fiddled around with the extra display settings yet (again).
No comments: Links to this post

Trying to be productive ...

I know this is the opposite of assiduously avoiding work but I bought some productivity tools so I could work more. And, I was excited about it. I wanted to get all connected, geek out, and tell you about how cool it all was. I got a thunderbolt-ethernet adapter and an app that would allow me to use my iPad as a second monitor.

Duet Display worked fine in the Apple environment but as soon as I logged into my Microsoft-based cloud environment, the dual screen functionality ceased. After the first try, I received a software update. Once downloaded, I tried - and failed - again. I'm 99% sure I had my settings correct (for dual monitor display) but when I get a chance, I'll double, triple check.

I test drove the ethernet cable in this day's hotel room, and didn't connect. I could call someone, I suppose, to help me but the phone is at the opposite end of the room. Maybe if I stretch the ethernet cable and the phone cable to their maximum lengths, they would meet in the middle. This has it's merits as I would then be back in bed. (I will give this serious consideration.)

It could be sign that I shouldn't work today. Just thinking. (Plus, closest WABL stamp is only 4 miles away. [Damn! So is the office!])
No comments: Links to this post

How did I get so lucky?

Arriving by email this morning, was this announcement from Uber: 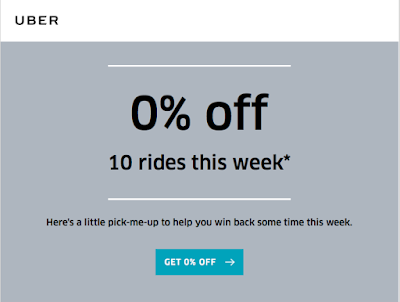 It lightened my mood. We have a new neighbor and I found it necessary to pay him a visit at a 6:45 a.m. to ask him to turn down his music.

We haven't even met so I ddin't want to start our neighborly relationship on a bad foot. Although, I could say, we're already there. He moved in sometime in early February during a week when we were out of town. When we came back, it was clear from the noises emanating though our common wall, that a new neighbor had moved in next door.

At first, I thought the noises were related to getting settled - moving furniture, breaking down boxes, hanging shelves and artwork. Moving nearly requires pizza, beer, and a certain amount of loud music. I cut him some slack.

The music continued for a week, then another week, and then we started to strategize about how we might bring this up to our new neighbor. He never played his music late at night but he played it rather constantly - in the morning, in the evening, and in all areas of the house. It didn't matter what room I was in, I could hear music through the wall. 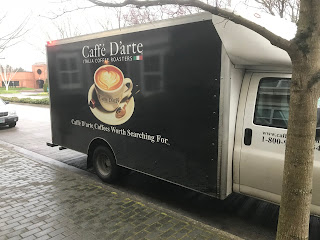 This morning, at 6:45 a.m., before I even had my first cup of coffee, I decided I needed to pay the neighbor a visit. Was it any wonder he couldn't hear the doorbell? 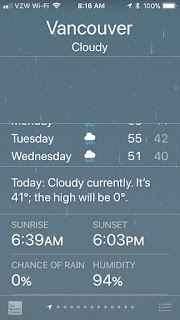 A short while later, we went out for our walk and the Caffe D'Arte truck was parked right outside our door again. This time. the motor was running and no one was inside it. So tempting!

Then, this. Getting ready for work, I consulted my weather app. It featured animated rain behind a forecast of 0% chance of rain.

I think God was trying to tell me to lighten up!

Until 6 a.m. this morning when it started all over again. The music. This time, I went over in my Grinch suit.

Welcome to the neighborhood.
No comments: Links to this post