There's a reason it only happens once a year. Because it's exhausting, that's why, and there's not enough eggnog in the world that can numb oneself to the extremes we go to to make it all happen.

The recipe is this: take all the crazy you can dish out for an entire year, save it up in a box out in the garage, take it out sometime in December and then wonder WTF am I doing this for, again?

But a certain amount of crazy is necessary. Not just for the holiday season but to remind us of what it is to be human. Stressed out and strapped for cash? Maybe, but somewhere in the mad rush to every year's finish line we find little nuggets of - dare I say it? - hope. Love. Being connected to something or someone. Someone other than oneself.

Okay, that might be the eggnog talking. I'm a little fuzzy on the details.

The tree went up today and the house has been abuzz with activity of the merry kind. It must be said that I have the two most adorable grandchildren in the world. One is four, and the other is four months. And I'm in love with them both. The four-year-old helped decorate the tree and hang the stockings, he made our lunch sandwiches, he helped make the Christmas cookies, and he made juice in the juicer for our Christmas toast. And then he vacuumed the house.

Can I keep him?

It was controlled chaos all day long. Bottles, burping, diapers, spit up. Running through the house, using tape and scissors (not while running), cookie crumbs under the chairs, and jumping on the beds. Getting out the juicer, the Swiffer, the vacuum and half the toys. Ornaments, the nativity, and a Thomas the Train pop up tent all in one space. The tree might have been beautiful but I couldn't see it for the mess.

And then it was over. The house was quiet. The energy expended left a deficit in the reserve account. And somehow, magically, when everyone finally went home, the house wasn't a wreck. I don't know how it happened. A train wreck one moment, and all is calm the next.

It’s quite possible that elves really do exist. I hear they make shoes, too.


Today's word of the day is:

noun, ( used with a singular or plural verb  ) Southern U.S.

I may have shaken my case of the mulligrubs. At least for today - maybe for the rest of the year - because I got this: 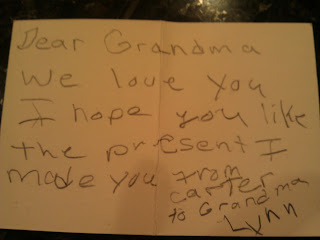 Really, can I keep him? (It was a tree ornament.)

By the way, it didn't snow here as my coffee mugs predicted. Not yet anyway. AccuWeather is currently forecasting it for the 20th. We'll see.